For scientists, being able to do something new is really great, but the world of a scientist requires a broad array of knowledge and skills. A good scientist needs to become a good writer, speaker, analyzer and criticizer. You are also expected to be able to manage and analysis large amount of data (big data). Recently, iPad is seen as a potential emerging tool for these purposes. Earlier iPad was believed to be a luxury or leisure accessory for an affluent level of a society. So, will it be useful as a research tool for scientists? 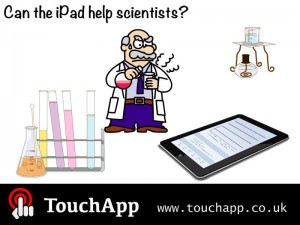 iPad provides some research and writing related apps, it enables scientists to present work, take notes, collecting data, etc. As scientists attend conferences all over the world the essential tools which should always be with you are PDFs, DOCs, Pages and image files, etc. these can be easily transferred on iPad and read with Dropbox.  There are plenty iPad mind mapping tools such as iThoughtsHD to help you organize and visualize your genius ideas and make you more confident while presenting your work in front of academically sound public. iPad can also help you to keep up with the latest readings in your area. App such as Get Info help you organize scientific articles quickly, you can easily grab and edit information from different web pages or document files. Taking a whole laboratory’s worth of equipment is no longer needed for study tour in a remote location. You don’t need carry a notebook, ruler and map, an iPad, which contains the apps like GPS Status, River Reader, Smart Ruler and Evernote can easily fulfill these requirements. Geologists from University of Pennsylvania’s Department of Earth and Environmental Science start to uses the Google Earth app to find locations that need examination, and to begin to compare changes by looking at satellite photos; biologists use Numbers app to enter evolutionary genetics data; doctors use the iPad’s camera to document X-ray films and laboratory researchers use LabGuru to retrieve and record protocols and results straight from lab bench.


Despite great potentials, the adoption of iPad among scientists appears to be going slowly. For many scientists, more suitable Apps such as scientific charts (with error bars) tools are needed for the scientific community. The majority of scientific websites still need to improve accessibility for iPad. Journals may need to consider release app versions of their magazines for iPad (and tablets). However, with the pressure from tech-savvy university students, researchers probably will be forced to increasingly rely on the iPad to build the connection. The convergence of iPad technology and science presents us with a great opportunity to bring science research into the thrilling mobile era.